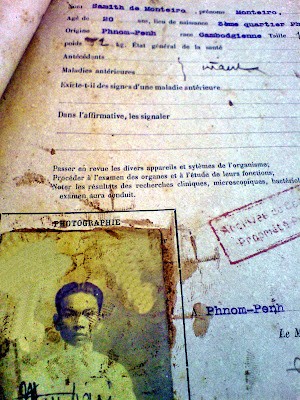 Among with other documentation that I was able to locate in the National Archives of Cambodia, I found the complete files of employees of the Crown and servants of the French Resident Superieur. Records with marginal notes, correspondence, requests of information, promotions and punishments, rewards and penalties express the installation of the modern bureaucracy and the transition of an Asian patrimonial State to Modern Western State. Among dozens of files identified, stood out the the mixed Portuguese-Khmer who lived in the country since the Sixteenth century, there remained influential until the arrival of Pol Pot to power. There are generations of Monteiro's, Canto's and Albergaria's occupying positions of importance in the palatine administration and provincial offices, some clerks (translators and secretaries) others military officers, diplomats and even ministers. They were well-connected men, as evidenced by the letters of reference, with direct access to the King and the French resident, but also to the high-ranking Catholic representatives and, even, solid friendships in Macau, Singapore and France. It was a minority that nothing else could do than working for the Administration. As you read more carefully the report of Sir John Bowring - British governor of Hong Kong and plenipotentiary minister to negotiate a treaty with Siam (1855) - published in 1857 (The Kingdom and People of Siam), I found references to "Protuguet" working in the Court, like their Portuguese-Khmer brothers. Among them, Pascoal Ribeiro de Albergaria, quoted by all the diplomatic missions since the 1820s. He was a general of artillery, had a long and prosperous career, and everything indicates he was also master of court ceremonies. His body was buried in a Catholic cemetery in Bangkok located in Ban called Khmer (Khmer village). I asked one of his descendants, now senior officer working for Thai Foreign Office if he knew something about of his illustrious ancestor, but he gave me no satisfactory answer. By late afternoon yesterday, when I got home, I had a strange intuition, of those who violate the laws of rationality. If Albergaria's tomb is near Ban Khmer - might have something to do with the Khmer Portuguese came to Bangkok in one of the three waves of fleeing Cambodians arrived here between the late Eighteenth and early Nineteenth century. However, by chance, in the writings of a British diplomat who came to Bangkok in the 1820s, I found the link: Albergaria was descendant from Cambodians and his family established in Oudong - and then Phnom Penh - since end of 17th Century. He was grandson of a Portuguese man and a Anglo-Malaysian "half caste" lady named Lister, converted by marriage to the Catholic faith. The British envoys, always schown hight respect for him. Was said to be a handsome, highly intelligent and communicative person, much appreciated by the Siamese king and high ranked siamese officials under Rama III and Rama IV reigns. Pascoal was able to speak Siamese, Khmer, English, Portuguese and Latin languages, qualifications that provided him with an indispensable place in contacts with traders and diplomats who visited the kingdom. Next time when I visit his descendants, will bring them the good news. Now, in addition to Siamese and Portuguese ancestors, they will know that are also partially English and Khmer. The Albergarias were not the kind of adventurous "Portuguese in the wild" nor "people of bandel" those semi-literate and rude but fascinating men who settled a bit everywhere from India to Timor. These were literate and, by family name, belong to a small Portuguese nobility that left Europe in search of a new life.
Publicada por Combustões à(s) 19:00